Do All Dogs Go to Heaven? According to Pope Francis, Yes – And Cats, Too.

When we are first confronted by death, what do we say, how do our children deal? The answer may be as simple as the pope offered: paradise is open, and God loves all His creation.

If you’re an animal lover, you’re in good company. We’ve seen some faithful dogs before, but that’s a poor comfort for moments of loss. We so long to know that our animals, who love us back, are in God’s hands. We even make movies about it (see: All Dogs Go to Heaven). But for the 1.5 billion Catholics around the world, and the millions of Christians outside of Rome who still hear his wise words for guidance, the wildly popular and compassionate Pope Francis just gave a more secure hope than Hollywood ever could. Per Time:

Pope Francis confirmed during his weekly address in the Vatican’s St. Peter’s Square that canines, along with “all of God’s creatures,” can make it to heaven.

The leader of the Catholic Church made the remark in order to comfort a young boy who was mourning the death of his dog, according to the New York Times.

“One day, we will see our animals again in the eternity of Christ. Paradise is open to all of God’s creatures,” said the 77-year-old Pontiff, according to Italian news sources. 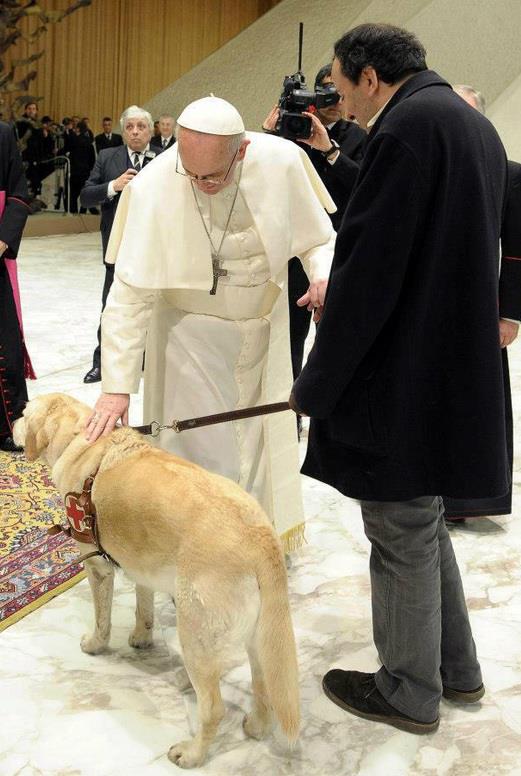 That’s right: according to the world’s preeminent Christian leader and theologian, all dogs do, in fact, go to Heaven. And it’s not inconsistent with the Christian faith to say so. Like mankind, animals are uniquely classified as having the “breath of life” in the creation account (Genesis 1:30) and, unlike plants, are given specific commissions to be fruitful and multiply (Genesis 1:22) – they have their own commandment! And just like the rest of creation, our furry friends wait with expectation, yearning for the world to be made new (Romans 8:19-22).

We do everything to shelter our children from death in the modern world; we make nursing homes so sickness is comforted and peaceful; we dress up bodies and embalm them; our food is so far removed from our table that though we may speak of a steak being a cow, it’s hard to grapple with the very real death that must take place. So when we are first confronted by death, what do we say, how do our children deal? The answer may be as simple as the pope offered: paradise is open, and God loves all His creation.