The Blood of Christ = Forgiveness

See how the blood of Jesus Christ will set you FREE!!

This is my blood of the covenant, which is poured out for many for the forgiveness of sins. -Matthew 26:28

It’s so hard to even comprehend the incredible sacrifice that Jesus made for us. He didn’t deserve the horrible punishment He endured and we don’t deserve His grace. But He gives it to us freely, nonetheless. Turn to the cross and be cleansed by His blood!

One day, a while back, a man, his heart heavy with grief, was walking in the woods. As he thought about his life this day, he knew many things were not right. He thought about those who had lied about him back when he had a job.

His thoughts turned to those who had stolen his things and cheated him.

He remembered family that had passed on. His mind turned to the illness he had that no one could cure. His very soul was filled with anger, resentment and frustration.

Standing there this day, searching for answers he could not find, knowing all else had failed him, he knelt at the base of an old oak tree to seek the one he knew would always be there. And with tears in his eyes, he prayed:

“Lord- You have done wonderful things for me in this life. You have told me to do many things 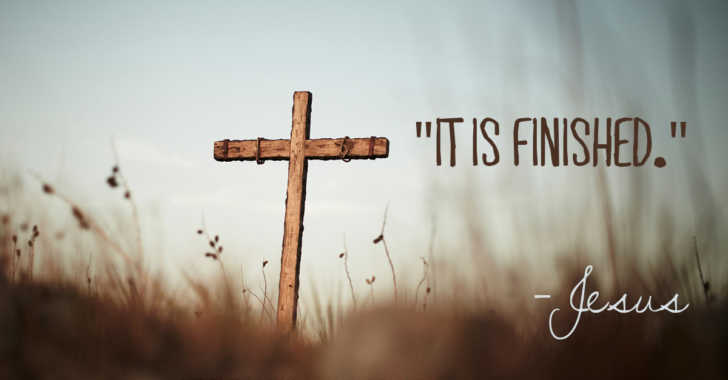 for you, and I happily obeyed. Today, you have told me to forgive. I am sad, Lord, because I cannot. I don’t know how. It is not fair Lord. I didn’t deserve these wrongs that were done against me and I shouldn’t have to forgive. As perfect as your way is Lord, this one thing I cannot do, for I don’t know how to forgive. My anger is so deep Lord, I fear I may not hear you, but I pray that you teach me to do this one thing I cannot do – Teach me To Forgive.”

As he knelt there in the quiet shade of that old oak tree, he felt something fall onto his shoulder. He opened his eyes. Out of the corner of one eye, he saw something red on his shirt.

He could not turn to see what it was because where the oak tree had been was a large square piece of wood in the ground. He raised his head and saw two feet held to the wood with a large spike through them.

He raised his head more, and tears came to his eyes as he saw Jesus hanging on a cross. He saw spikes in His hands, a gash in His side, a torn and battered body, deep thorns sunk into His head. Finally he saw the suffering and pain on His precious face. As their eyes met, the man’s tears turned to sobbing, and Jesus began to speak.

“Have you ever been given too much change and kept it?” The man answered – “Yes. Lord.” And the man sobbed more and more.

“Have you ever taken something from work that wasn’t yours?” Jesus asked? And the man answered – “Yes, Lord.”

“Have you ever sworn, using my Father’s name in vain?” The man, crying now, answered – “yes, Lord.”

As Jesus asked many more times, “Have you ever…?” The man’s crying became uncontrollable, for he could only answer – “Yes, Lord.”

Then Jesus turned His head from one side to the other, and the man felt something fall on his other shoulder. He looked and saw that it was the blood of Jesus. When he looked back up, his eyes met those of Jesus, and there was a look of love the man had never seen or known before.

Jesus said, “I didn’t deserve this either, but I forgive you.”

It may be hard to see how you’re going to get through something, but when you look back in life, you realize how true this statement really is.