Touched By An Angel: Tim Tebow Attends and Prays Over Baseball Fan Having a Seizure

In a minor league game, Tebow has come to the rescue of a man who was having a seizure after the game. Tebow attended to the man and prayed over him.

Most of us know Tim Tebow by now. The former football player, who has been very open about his faith, has put on cleats once more, but this time for baseball’s New York Mets. And just as on the football field, a prayer and demonstration of compassion is never far away. Case in point: 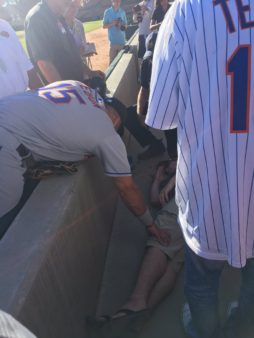 Transitioning careers is never easy, even for someone as athletically gifted as Tim Tebow. This means putting in the work at the bottom level – in this case, minor league and developmental games. But even on the diamond instead of the gridiron, Tebow remains deeply rooted in his Christian faith. So it should come as no surprise that that when a fan collapsed at the end of a game, it wasn’t paramedics who got there first – it was Tim. Kneeling over the man, saying a prayer, and staying with fans is what we should expect from all sports heroes.

You can hear him in the video below, telling him to “Hang in there, buddy.”