The term “social justice” never appears in Judeo-Christian scripture. But justice is a clearly understood and promoted theme in both the Hebrew and the Christian testaments. The concept of justice revealed and commanded in the scriptures is by definition, both universal and transcendent. But what does it mean for a Christian today, when social justice looks like political activism, often for social issues that have deep moral implications for our faith?

Commonly used in both secular and religious circles today, specifically “social” justice is a relatively recent invention, the term coined in the 1840s by Jesuit priest Luigi Taparelli in his book Civilta Cattolica – that is, Catholic Civilization. Yet today, the term has become politicized, divorced from its Christian roots, as have so many other words in recent decades. As a result, it has become a rather meaningless term. Rather than describing a practical, real, useful, and universally recognizable behavior, it is now nothing more than an emotional phrase used for political advancement. 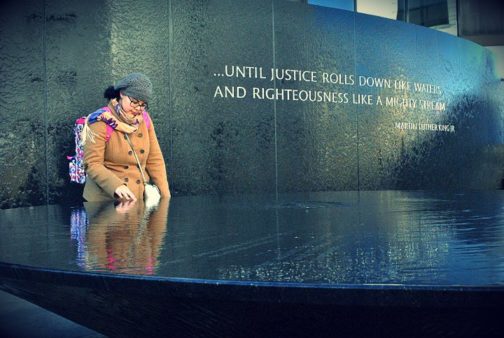 A woman pauses in reflection at the Marthin Luther King, Jr. memorial.

“Social justice” nowadays is usually understood and practiced as a purely secular idea – about race, about material wealth, about sex and gender – without any sense of the transcendent. Because it is not rooted in universal concepts like love, truth, beauty, and goodness, its meaning is as fluid as the shifting tides of current events and the culture around it, which move so wildly that they can actually contradict themselves over time.

Historically speaking, all of the secular ideas of social justice bandied about by sincere persons, or political parties to date, more often than not, fall short of their expressed ideals. Because the often “utopian” ideas of secular social justice are not rooted in transcendental or universal understandings of justice, they quickly grow moribund and fail. How could it be otherwise? These programs never take into account the fallen nature of humanity; they do not recognize God, or the need for God’s grace.

As Christians, we know and believe that Jesus Christ died for all, that he liberated us all from the age old slavery to sin and death once and for all. But we also know that he made each one of us free. It is in this freedom that we can choose to be good or evil, just or unjust. All injustice is understood, in Christian terms, to be the result of sin.

Pride, greed, anger, envy, lust, gluttony and sloth, in all of their forms, are the sins that we all have participated in, and when we sin, injustices, great and small, are always the result. This is an undeniably universal truth. Secularists may deny the concept of sin, but they can point to its universal consequences as surely as the religious person can. All injustice is social in the sense that it results from human choices and actions that negatively affect other people.

This, of course, is why we make laws. We have good instincts after all. As Paul tell us,

“All who have sinned without the law will also perish without the law, and all who have sinned under the law will be judged by the law. […] When Gentiles, who do not have the law, by nature do what the law requires, they are a law to themselves, even though they do not have the law. They show that the work of the law is written on their hearts, while their conscience also bears witness, and their conflicting thoughts accuse or even excuse them” (Rm 2:12-16)

This going against our own God-given nature divides our very personalities and causes divisions in our societies. No man is an island, after all. All of our actions have consequences beyond ourselves.

What, then, is the true source of the justice we seek? Universal virtue. It is only in the development of universal virtues like humility, generosity, hospitality, care, compassion, mercy, forgiveness, courage and temperance, that we will be able to bring about the justice we all desire. Justice comes only when we develop the ethics of self-giving and service. This can only arise out of the regular practice of love. This kind of love is possible only through God’s grace and our openness to it. When we learn to love God with all of our hearts, minds and souls and our neighbors as ourselves, and practice that love in our daily lives, then, and only then, will we begin to be able to enjoy the justice that is natural to all of us.

Jesus tells us, “Do unto others as you would have them do unto you” (Luke 6:31). Like all truths, these words of Jesus are best understood and realized in the doing of them. The secular theorists have good instincts as they, too, are generally motivated by a kind of love for the other, especially the oppressed other. But they fall short in their applications of “social justice” because they generally believe that government is the best means for bringing about this justice. Jesus doesn’t just tell us to love, he shows us how to love by willingly suffering and dying on the cross. 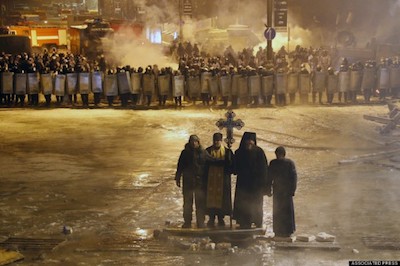 The justice we seek is not a matter of political will, or social contract. It is virtuous character practiced individually, and experienced corporately. It is a matter of doing what is necessary in oneself and in our churches and in our political and social institutions, to eliminate all divisions, in keeping with the idea that “there is neither Jew nor Gentile, neither slave nor free, nor is there male and female, for you are all one in Christ Jesus” (Gal. 3:28).

It is this transcendent and universal truth that is the core of the Christian understanding of justice. We are all in it together. It is also true that only by God’s grace, are we able to live out this truth. We will not rid the world of injustice in our lifetimes; that is a fact. It is beyond our human capacities. But in each of our lives, we can become the persons that he made us and wants us to be.

It is only by God’s grace and our willing and humble recognition of our need for that grace that we are able to become righteous enough to see the justice that our hearts so naturally and earnestly desire.

Dan Doyle is a husband, father, grandfather, Vietnam veteran, and retired professor of Humanities at Seattle University. He taught 13 years at the high school level and 22 years at the university level. He spends his time now babysitting his granddaughter. He is a poet and a blogger as well. Dan holds an AA degree in English Literature, a BA in Comparative Literature, and an MA in Theology, and writes regularly for The Veterans Site Blog.
Whizzco for FHB