There are vast numbers of ancient burial sites around the world which we will never find or explore. But, one town in the UK has been the site of extensive archaeological work on a tomb of late antiquity which was discovered in 2003 as part of a road improvement project. Researchers have found the jackpot of Anglo-Saxon burials in this gold-laden grave. While the archaeological site was discovered long ago, excavations on the area have now really shown what all was in the tomb and the results are pretty spectacular. 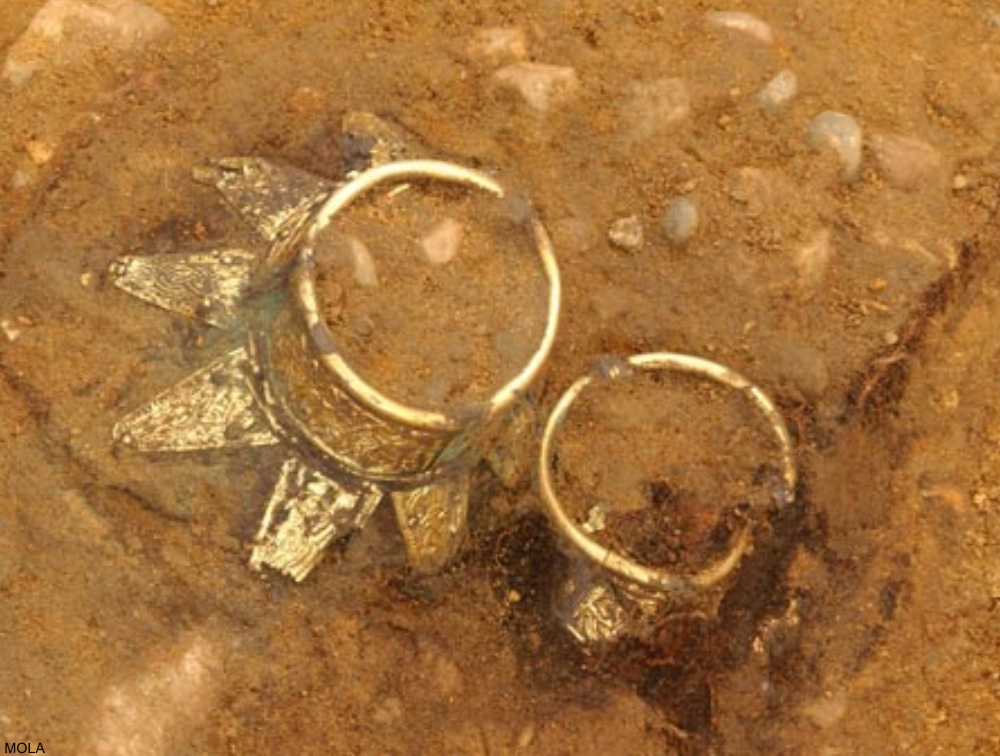 The work of 40 people over more than 15 years, sifting through hundreds of artifacts from the 6th or 7th century, was undertaken by the Museum of London Archaeology (MOLA) and the research shows that the man inside the tomb would have been quite privileged and wealthy in life. Some have suspected he was a king, even going so far as to call him the “King of Bling” and musing that the tomb was that of Saebert, King of Essex, but the carbon dating showed the tomb was constructed long before his death. But, now researchers think the tomb may have actually been created for Saebert’s brother, Seaxa. 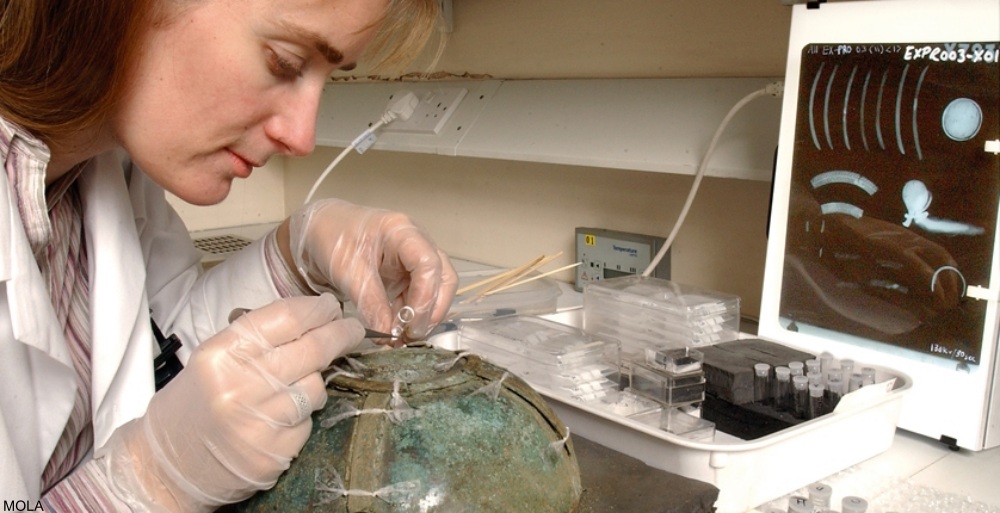 The tomb represents a combination of Christian burial practices and older pagan rituals. Gold crosses (probably placed over the eyes of the corpse) showed not only status, but also that he had links to Christianity. While this is very early for Christianity in England, the ruling family at the time had a few Christians who had married into the family from other parts of Europe. These new members would have had knowledge of Christian customs. On the other hand the burial mound filled with items that a man of nobility might want in the afterlife speaks strongly to pagan beliefs about what happens when a person dies. 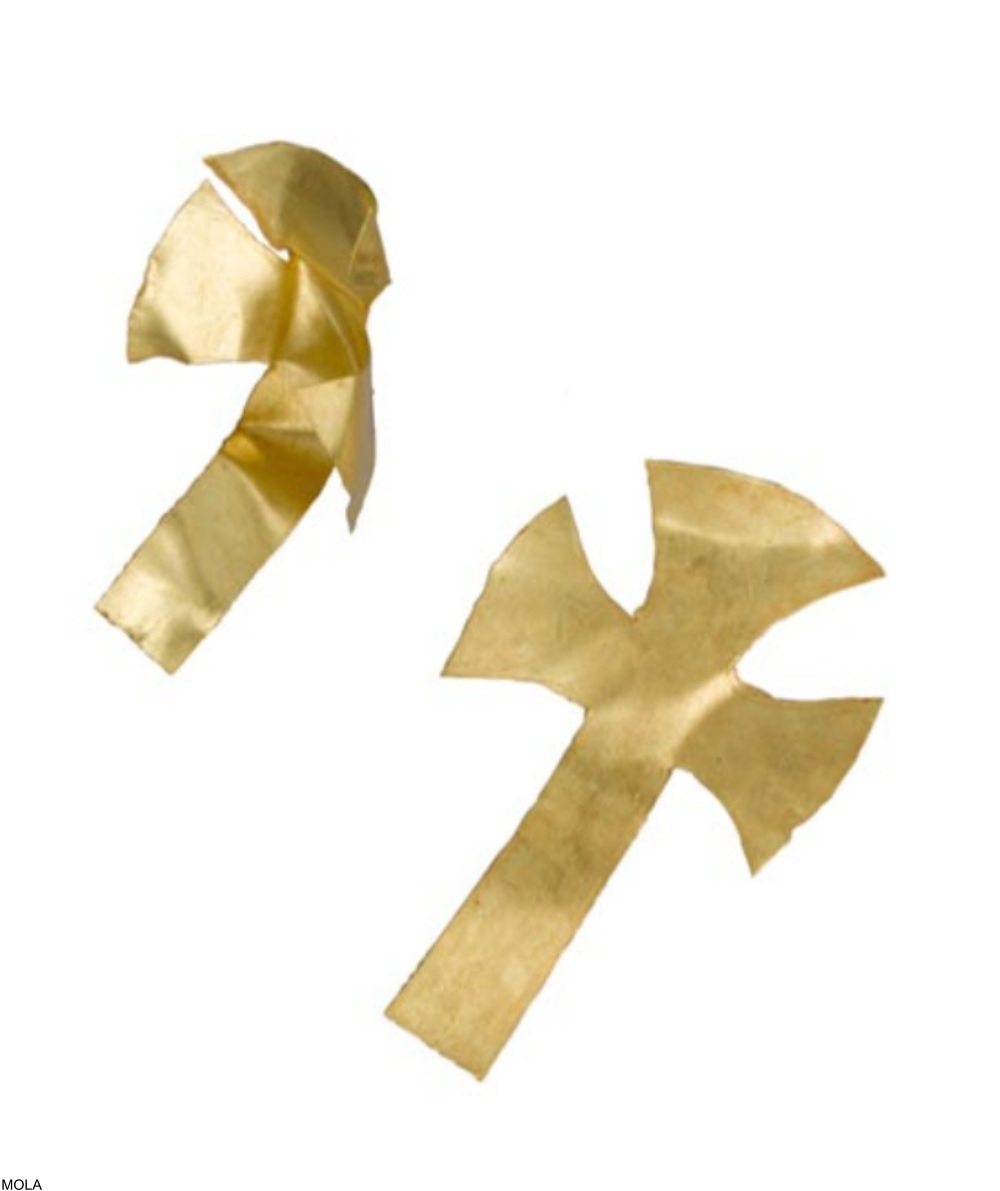 Inside the tomb was a sword, many drinking vessels, pots, and a folding chair of the type that a nobleman might give orders from. Based on these finds it does seem like the people who buried him were trying to get him set up in the afterlife. Renderings of what the tomb may have looked like certainly show how the burial room was set up to honor a person of very high birth on their final journey. 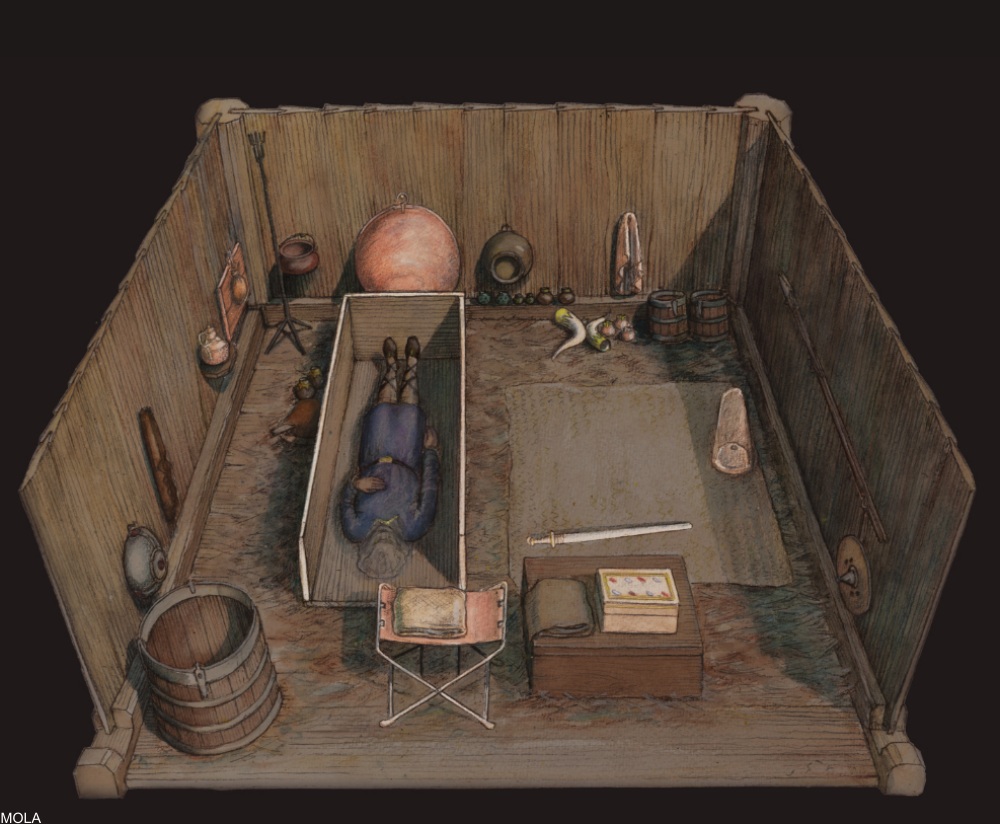 The well-drained, sandy nature of the soil meant that the bodily remains of the occupant had decayed and washed away. The only human remains on the site were fragments of tooth enamel, which of course takes much longer to break down. However, the many metal ornaments, bowls, and instruments at the tomb were preserved in the soil. MOLA director, Sophie Jackson, in a press conference compared the burial and accompanying grave goods to the discovery of King Tut’s tomb.

Engraved gold lips topped wooden drinking vessels made of wood and horn, a copper alloy decanter, coins, decorative glass beakers, remnants of a lyre, and a gold belt buckle were among the many treasures that were found in the tomb, buried under a mound decorated with stones on top. 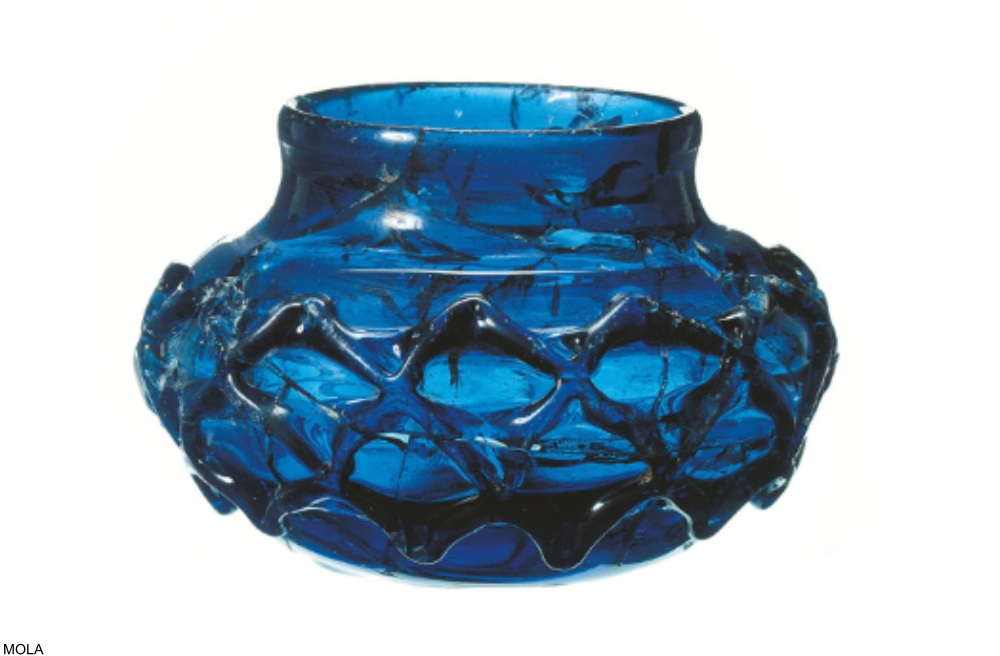 The MOLA has now created an interactive online site where you can explore the tomb in detail, and see all the finds for yourself and exactly where they were found inside the tomb. The objects themselves will be on display at the Southend Central Museum beginning in May of of 2019.

Mysterious glass bowl at grave may be early Christian artifact: Click “Next” below!