The world can seem hard and cold, making it even more touching when the inherent goodness of humanity is pushed to the forefront, and acts of kindness get the attention they deserve. Such was the case in Vancouver, Washington, when a woman pulled through to get some coffee but pulled away with much more. It was an ordinary day for Evan Freeman, Pierce Dunn and their co-workers at the Vancouver Dutch Bros. Coffee shop when a regular customer pulled through the drive-through to get her morning coffee. 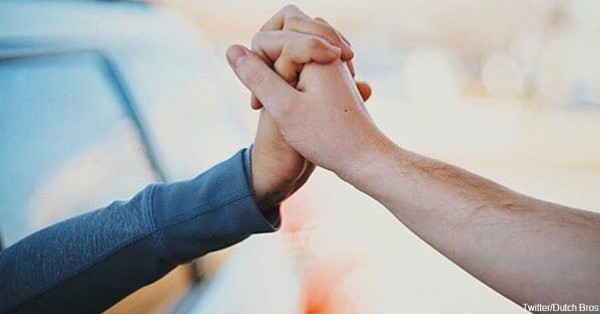 The customer looked visibly shaken and seemed to be emotionally falling apart, so the two coffee baristas and a third unidentified worker stopped what they were doing, pushed their hands through the window and prayed along with her. The group later said they could tell she was suffering, and they wanted to find out why, help her if they could, and make her feel loved. As it turns out, the woman, age 37, had just lost her husband the night before, and the pain they were seeing come through was despair and grief at his passing. The group prayed with the woman for several minutes, comforting her, oblivious to their work or customers waiting in line. 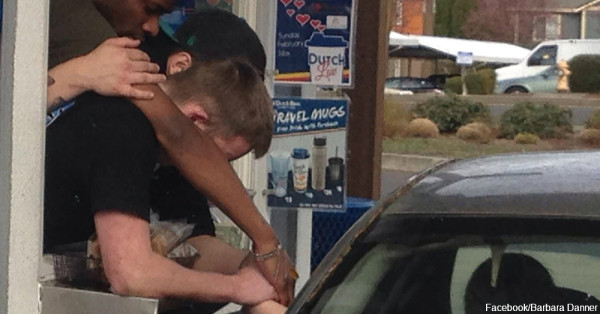 The woman waiting in line behind her, Barbara Danner, didn’t mind; she captured a photo of the moment, sharing it on the Dutch Bros. Facebook page, where people were touched by the kindness shown to the customer, causing the photo to go viral. The photo garnered more than 453,000 reactions, over 17,000 comments and more than 140,000 shares among Facebook users alone. Pierce Dunn, one of the baristas in the photo, later discussed his role in the moment, noting that if everyone “did an act of kindness” daily, the world would be a “completely different place.”