This Is the Sign of Genocide, and We Are Nun.

Over the last several months, ISIS has been on the march through central Iraq. The ongoing civil war has begotten thousands of refugees, among them the most persecuted Christians of the Middle East.

Christians have been persecuted in the Middle East for centuries. but the ongoing Iraqi Civil War and ISIS have brought a new spectre reminiscent of 1930s Germany. We stand in solidarity.

Over the last several months, the Islamic State in Iraq and Syria (commonly known as ISIS or ISIL, with the L standing for the Levant region) has been on the march through central Iraq. With the coalition draw down at last concluding, the military power vacuum has left space for theologically conservative political militants to seek the proverbial throne. The ongoing civil war has begotten thousands of refugees and various tribal governments in place of a united nation. Among those refugees, perhaps the most persecuted, are Christians of the middle east.

Persecution isn’t new for the Christians under Islamic governments; under Mohammed and the ensuing caliphate, People of the Book (including Jews) were required to pay a tax known as the jizya, convert to Islam, or face death. These ancient faith communities, established as early as the late first century, have since dwindled to mere pockets of confessors, cut off from the support of the global Church. Now, says Syriac Patriarch of of Antioch Ignace Joseph III, “There are none left [in Mosul, Iraq]. There were about ten families forced to flee yesterday, but they stripped them of everything. They wanted to go to Kurdistan, but were left alone at the frontier of the city, and only after being robbed of everything.”

More than being robbed, Christians now face the caliphate that ISIS has publicly sought to establish: convert, pay a tax or face death by the sword. On July 18, ISIS affiliated groups in Mosul burned the seat of the Syriac Catholic Church to the ground. Genocide, says middle East Christian news blog Rorate Caeli, has been accomplished. There are no Christians left, a report confirmed by various news outlets, and the cross has been removed from the dome of the Saint Peter’s Orthodox cathedral. 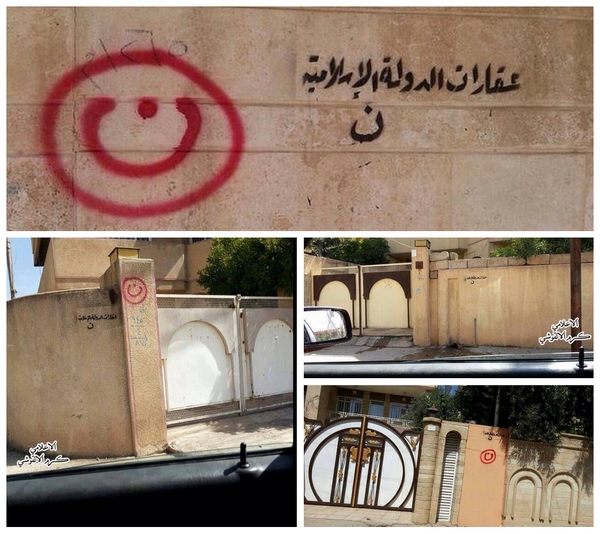 Finally, to mark the homes of Christians in Mosul – which up until recently had the largest percentage of Christians anywhere in Iraq – ISIS-affiliated groups have tagged homes with the Arabic character [ن], pronounced nun, the equivalent of the Latin “n.” A stand-in for the for the full word Nasara, the sect of the Nazarenes, followers of Jesus of Nazareth, it is both an insult – casting Christians as a heretical sect of Islam according to the Nazarenes, placing them in a geographic area in Israel, outsiders to Iraq – and a threat.

The tags came with a message distributed to the Christians of Mosul: “accept Islam, pay extra taxes to Islamic Sharia courts or face ‘death by the sword.'” ISIS means the nun as a mark of shame, but we should wear it as a mark of hope: Yes, we are in the army of the Resurrected Nazarene, the Master and Lord of the Universe, the Man who is God Almighty, the Second Person of the Trinity. You may kill our brethren and expel them, but we Christians will never go away.

The message was taken up by the local Islamist rebel faction, and the Christians have fled for Kurdistan along with other religious minorities, including Shi’ite Muslims and Yazidi. This is what genocide looks like. And it never, ever ends well.

Our brothers and sisters on the other side of the world are being persecuted on a scale we in America can hardly begin to fathom. And as one church, one Lord, one baptism, it is worth noting that we are N. Pray for the Church, especially those persecuted, and remember this letter as a sign of solidarity.