The Parable of the Vineyard is Our Own Story, From Jesus’ Own Lips

Jesus then reminds them, and us, of the scriptures:

The Pharisees were trained in and knowledgeable of those scripture, just as we say we are. When he does this, they become painfully aware of the fact that the parable is about them and their reaction seems familiar, is it not? They get that Jesus is talking about the Old Testament prophets when the landowner sends servants to the vineyard. Ancient Israel, the chosen people of God, ignored, maligned, and sometimes even killed the prophets. But the Pharisees don’t understand themselves as ancient Israel, or if they do, they aren’t happy with the implication: they’re angry, how dare Jesus insult their character?

Sounds about right, doesn’t it? Don’t we have a similar reaction? Is our faith strong enough to recognize that Jesus is speaking about us too? Have we at times been guilty of shunning those people who reveal our own sinfulness or worse? Do we have faith enough to see our own guilts and respond with repentance, or do we fall into the human thinking and rationalizations of the Pharisees?

These are difficult questions, but let us try to work our way through them. 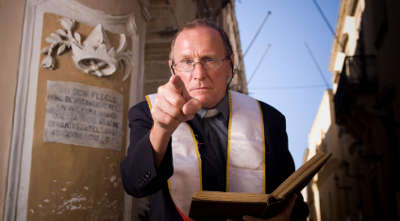 Do we believe that every word Jesus speaks is the truth, the whole truth and nothing but the truth? If so, what are we saying about ourselves if we find ourselves saying things like, “Yes, Jesus said that and I ‘tend’ to agree, but…?” Do we at times approach the Gospels, that is, what Jesus taught, as something with which we may agree or disagree, as if it is simply one of among many philosophies from which we have a “right” to pick and choose according to our own sensibilities?

If we think this way, we are a bit like the Pharisees, judging Jesus’ teachings. This is not something that a true disciple of Jesus would say. Jesus did not come to reveal just another philosophy among many; he came to reveal the truth, the only truth that can save us. He is the complete and final revelation of God. Does he not say, “Whoever has seen me has seen the Father” (Jn 14:9)?

We can never come to know our true selves unless we see ourselves in the light of this truth. I have been in many a conversation lately, for obvious reasons, about guns and “gun control” with fellow Christians. I’m sure that the reader can say the same. When I have brought up the Sermon on the Mount, or Jesus telling the Apostle who had just cut off the ear of one of the guards who was arresting Jesus, “Put your sword back in its place, for all who draw the sword will die by the sword” (Mt. 26:52), they have argued, often quite angrily, their own philosophical or their own current politically useful arguments to defend their positions.

There ought not be a single opinion in our minds that we are unwilling to challenge in the light of the Gospel. Our greatest task as disciples of Jesus is to grow in humility. There is no opinion that I can have that is greater than the truth of Jesus Christ. But we live in a culture that defies such humility. It is common in this age for people to think that we are “smarter,” more advanced in every way than those who lived in the past. But to turn away from God, to deny the truth of Jesus Christ is to invite chaos into every aspect of our lives.