This 5-Year-Old Did Something Most Adults Wouldn’t Do!

The great thing about children is that they experience things with fresh eyes. As adults, we often pass by things without taking an account of what we’re actually seeing. 5-year-old Josiah Duncan just saw something for the first time but, unlike the adults around him, he had the uninhibited bravery to do something about it…

Josiah and his mother were out for a meal at their local Waffle House one day when they came across a homeless man. According to Josiah’s mother when she talked with WSFA Montgomery,  Josiah began asking his mother about the man and why he was homeless. She answered to the best of her abilities, taking into account the complexities of homeless life.

They went into the restaurant and later, the homeless man came inside too. He sat by himself and wasn’t given a menu. Josiah leapt into action and persuaded his mother to buy the man some food. Josiah approached the man and offered him a menu so he could order some food. The man initially insisted on ordering an inexpensive meal, but upon Josiah’s mother’s insistence, he ordered the food that he truly wanted: a burger topped with bacon.

But the story doesn’t end there…

Propelled by the honesty of youth and a strong desire to do good, Josiah insisted on saying grace with the man before he ate. Josiah was taught to say grace in a sing-song style and when he starting singing his blessing, 11 other customer’s in the Waffle House took notice. Josiah started singing and the people surrounding him, including the homeless man, began to cry.

“The man cried. I cried. Everybody cried,” said Josiah’s mother. 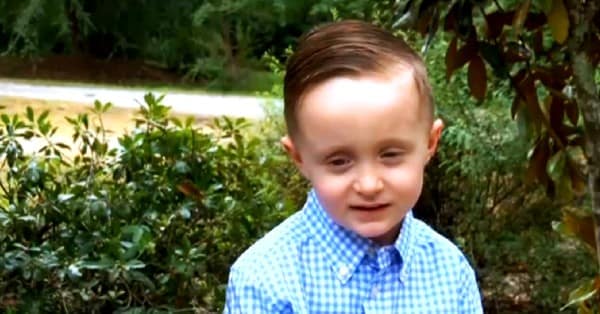 Children are constantly learning as they experience the world for the first time. But it’s at times like these that we can learn something from the inexperienced. Josiah Duncan teaches us that it’s important to ask questions and that, when someone needs help, it’s our job to lend them a hand.

According to the National Coalition for Homeless Veterans, 12% of the adult homeless population have served in our country’s military. Nobody knows who this homeless man was, but the problem of homelessness is all around us. This man could’ve been a veteran, he could’ve been a father. All we know is that this man needed help and a 5-year-old gave it to him, which is something we can all learn from.

Take a page out of Josiah’s book and help feed a homeless veteran. Nearly three million veterans and their families don’t have enough to eat each month. This is in addition to the physical, mental, and emotional trauma many veterans contend with every day.

You can make a difference.

You can help save a veteran.