He Now Knows Her Name

Air Force Master Sergeant Michael Maroney completed 152 rooftop rescues in the aftermath of Hurricane Katrina. Ten years later, one of those 152 rescues continues to have a profound impact on Maroney’s life. How so? Despite the devastation, the little girl he rescued that day had a smile on her face, as well as a pride of her hometown that not even a hurricane could damage. She pointed her home out to Maroney. She pointed out her school. And she gave him the biggest of hugs. 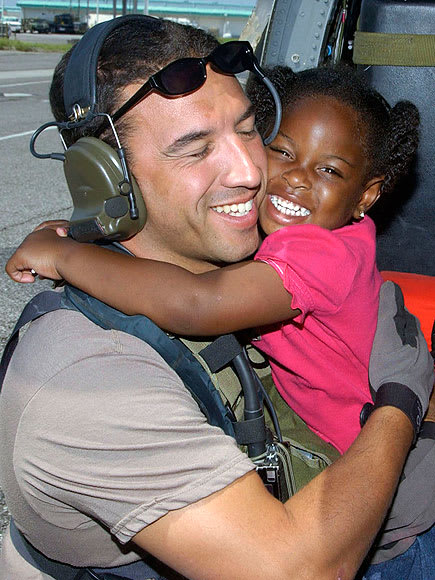 It was an unforgettable experience for Maroney. Today, as he has for years, he hopes to reunite with the little girl that gave him hope. There’s a problem, though: he didn’t know her name.

“She pointed her home out to Maroney. She pointed out her school. And she gave him the biggest of hugs.”

Not knowing her name spurred Maroney into a search for her. A photo appeared across several news sources. An Instagram account was created. The picture was even on Burger King placemats!

Despite the search going viral, it yielded very few results. Maroney kept going, though, and so did the campaign, eventually leading to what People reports as a scheduled reuniting of the two.

The girl’s name is LeShay Brown. Now thirteen, she lives in Waveland, Mississippi with her family.

She and Maroney have been in contact, and they are to meet again sometime in September, where the search truly started: New Orleans.

In the event that disaster happens, trained personnel must react. And, as you saw with Master Sergeant Michael Maroney, our veterans are more than qualified.

Despite years of training and experience, vets must also contend with higher-than-average unemployment rates, making it difficult to find a sense of purpose or community during their transition back into a civilian lifestyle.Rather than focusing on vocational training that attempts to teach new job skills, Team Rubicon repurposes veterans’ existing skills—emergency medicine, risk assessment and mitigation, teamwork and decisive leadership—to solve another need: more effective disaster response.

G.D resides in West Michigan. When he isn’t writing (or editing), you can find him outside, riding a bike, reading a book, or just plain running. Other interests include sports (of any kind), music (again, any kind) and cinema (a bit pickier here).
RevContent