Xavier Elliott, 10, learned to sew from his mother, and the youngster uses his skills to make clothes for homeless kids.

Talk about paying it forward! Xavier Elliott, 10, learned to sew from his mother, and the youngster uses his skills to make clothes for homeless kids. The very grown-up idea was inspired by Xavier’s own experience as a homeless child.

The Elliotts, who live in Phoenix, Arizona, spent time among six homeless shelters after Xavier’s father returned from duty in Iraq and suffered from post-traumatic stress disorder. Despite the hardships, they stuck together.

One day after the family had gotten on its feet, Xavier noticed his mom, Stephanie Elliott, sewing purses. He asked her to teach him the tricks of the trade, and then implored her to buy him fabric with his allowance money, according to USA Today. The youngster’s enthusiasm was so infectious, his project grew beyond just his immediate family.

After the Elliotts created a Facebook page asking for help, young Xavier received bins upon bins of fabric from all over the country. All he needs is a second sewing machine so he doesn’t hog his mother’s device. The Huffington Post notes Xavier gives his completed garments to charities all over Phoenix, including the Salvation Army, Crisis Nursery and UMOM New Day Center. The young fundraiser accepts donations of clothing to distribute, but also fabric to make clothes for the needy. 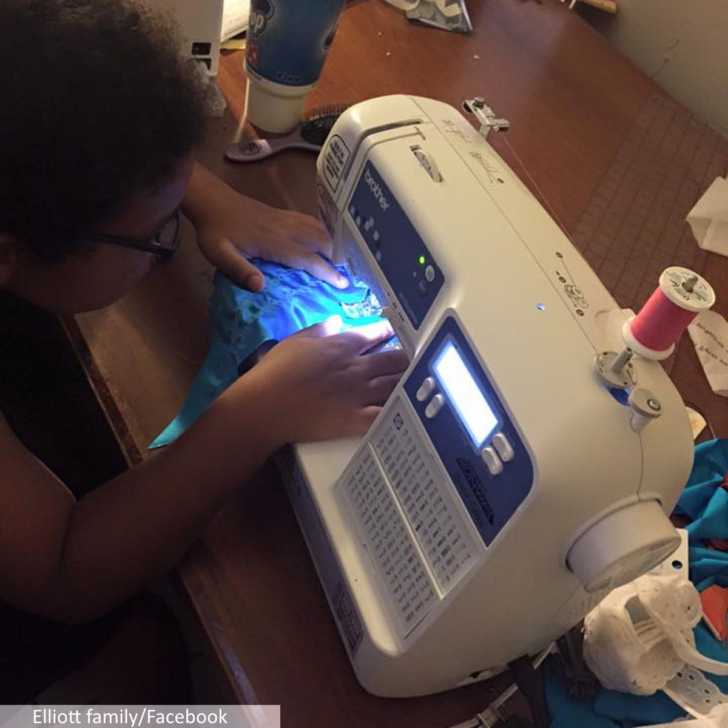 Xavier hopes his Facebook page encourages others to help him and to help homeless people elsewhere. The youngster’s compassion for others came from the epiphany that his family had a lot of stuff, yet homeless people don’t have as much. Therefore, Xavier decided to spend his free time, and his allowance, to help people who are in tough spots much as he was at one time.

The kid feels as if his sewing keeps his family together, literally and symbolically, with each stitch. He’s learned quite a valuable lesson for a 10-year-old who could be spending his time watching television or playing video games.

Xavier’s kindness towards others stems from his life experiences, and his lessons from an early age will shape his adulthood. Xavier is just starting out that journey to adulthood, yet he has endured more in his first 10 years than many people do by age 30. Instead of dwelling on his traumatic past, this youngster turned a negative experience of turmoil, uncertainty and poverty into a positive one filled with hope, grace and richness.

Here is a practical way to turn your faith into action! Right now we are raising funds to donate sleeping bags to the homeless.

Just $25 covers the price of a sleeping bag and a care package. Donations are 100% deductible, and 100% of everything donated goes directly to those in need. Click here to donate!

Visit the Elliott family’s Facebook page to find out what you can do to help Xavier with his mission.