Till Death Do Us Part: Couple Dies Together Within Hours After Their 75th Anniversary

The Toczkos show that true love may conquer all, even in death. A lifetime of love sets an example for children, grandchildren and friends to always honor, cherish and respect those close to you.

A San Diego couple, married for nearly 75 years, died within 24 hours of each other and in each others’ arms. Alexander and Jeanette Toczko passed away two weeks shy of their actual wedding anniversary, in their home and surrounded by family. The couple’s children told local media that their parents wanted to die next to each other, which is precisely what happened, according to KIRO TV.

The unlikely event occurred due to Alexander Toczko’s hospice care unit, which brought a bed into the couple’s home so they could be together. The husband died June 17, 2015, laying next to his beloved. Jeanette Toczko hugged her husband, said “I love you” and told him she would see him soon, notes the Huffington Post. She passed away 24 hours later.

Family members chose to celebrate the remarkable anniversary early because of the Alexander Toczko’s failing health, KGTV. Their mother continually asked for the date, and her children told her it was June 29 — the date of the couple’s actual anniversary so the couple could be at peace.

Aimee Toczko-Cushman said her father and mother’s “hearts have been beating as one” for as long as she could remember. The couple became boyfriend and girlfriend at age 8 and married in 1940. The elderly couple’s family recounted that their parents always wanted to die in each others’ arms and they wanted to make it to their 75th wedding anniversary. The Toczkos made both wishes come true. 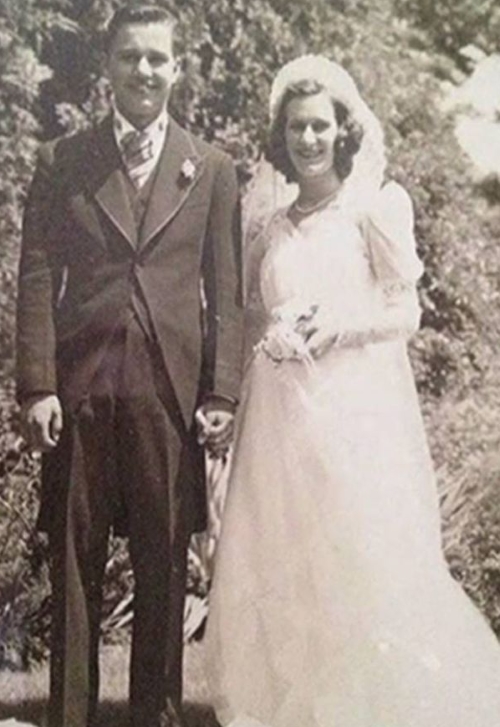 This touching story is not the only one that deals with couples passing within hours of each other. A couple in Fresno, California, died within five hours of each other in February 2015 after a 67-year marriage. Floyd and Violet Hartwig died holding hands in separate hospital beds. The Hartwigs knew each other since elementary school, says KTLA.

Broken heart syndrome, as evidenced by these two couples, may be an actual medical malady. Technically called stress-induced cardiomyopathy, broken heart syndrome involves a sudden onset of heart muscle problems, normally brought on by an emotionally stressful event. One side of the heart swells, while the other side remains normal. This temporary enlargement causes the heart to stop pumping regularly, and the condition can turn fatal if not treated immediately, according to the American Heart Association.

The Toczkos show that true love may conquer all, even in death. A lifetime of love sets an example for children, grandchildren and friends to always honor, cherish and respect those close to you.