Communion on the Moon

“And he took bread, and when he had given thanks, he broke it and gave it to them, saying, “This is my body, which is given for you. Do this in remembrance of me.” And likewise the cup after they had eaten, saying, “This cup that is poured out for you is the new covenant in my blood.” – Luke 22:19-20

Not many people know it but on July 20th, 1969 Buzz Aldrin took communion on the moon. The very first meal ever taken on the moon was the blood and body of Christ! Watch the 1998 dramatization of the event and you can see what a deeply faithful and devout man Buzz Aldrin is.

“In the radio blackout, I opened the little plastic packages which contained the bread and the wine. I poured the wine into the chalice our  church had given me. In the one-sixth gravity of the moon, the wine slowly curled and gracefully came up the side of the cup. 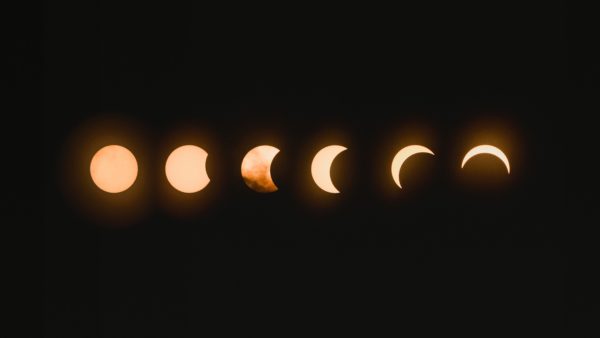 Then I read the Scripture, ‘I am the vine, you are the branches. Whosoever abides in me will bring forth much fruit. Apart from me you can do nothing.’

I had intended to read my communion passage back to earth, but at the last minute [they] had requested that I not do this.  NASA was already embroiled in a legal battle with Madelyn Murray O’Hare, the celebrated opponent of religion, over the Apollo 8 crew reading from Genesis while orbiting the moon at Christmas. I agreed reluctantly. 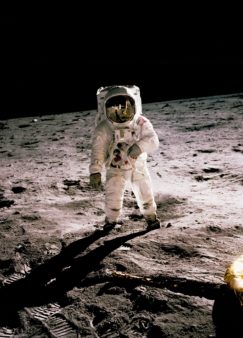 I ate the tiny Host and swallowed the wine. I gave thanks for the intelligence and spirit that had brought two young pilots to the Sea of Tranquility. It was interesting for me to think: the very first liquid ever poured on the moon, and the very first food eaten there, were the communion elements. 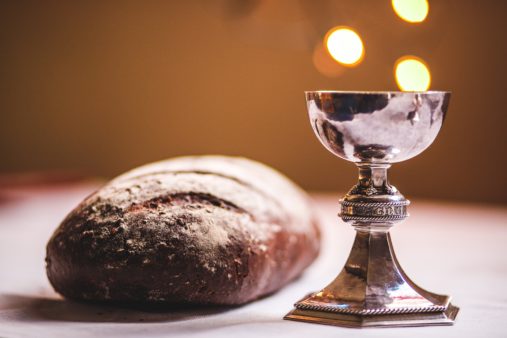 And of course, it’s interesting to think that some of the first words spoken on the moon were the words of Jesus Christ,  who made the Earth and the moon – and Who, in the immortal words of Dante, is Himself the ‘Love that moves the Sun and other stars.'”